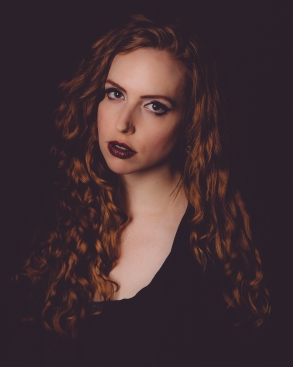 Shannon Graham is a saxophonist/singer/composer in Toronto, Canada. She has been working as an entertainer for over a decade and has released five studio records of original music. In her most recent record, Happy Alchemy (May 2022) she displays her singer-songwriter abilities alongside the immaculate Odin String Quartet. Since 2020, Shannon has also been working as a professional Recreation Therapist, providing programming for seniors including music concerts, sound therapy, fitness, and educational lectures.

Shannon Graham has played many parts throughout her life: classical violist, jazz saxophonist, experimental composer, pop singer, and chamber-jazz concert presenter. Throughout her career she aims to continue blurring the lines between musical genres and what is considered art and entertainment. She believes that good music can connect people by provoking empathy, insight, and catharsis. 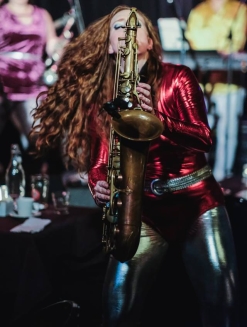 Her charismatic performance style has made Shannon a busy saxophonist/singer in the pop and world music scenes.  She performs weekly with cover band Groove Marmalade and tribute shows by JV Music, specializing in R&B, soul, salsa and Latin, Top-40, and music for seniors, throughout venues and private events in the GTA and casinos in the USA. 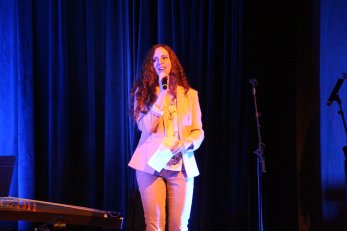 Shannon has been contributing her compositional voice to Toronto’s creative music and new music communities for several years. Her music, influenced by a background of training in both jazz and classical music (as well as a life-long love of pop music), has been performed in the Spectrum Music series, and commissioned by Toronto musicians from both communities. Shannon served as musical director for Atom Egoyan’s 2019 film “Guest of Honour” and her piece “The Puppetmaster” plays an important role in the story.

In 2015 she co-founded the chamber-jazz saxophone quartet Dialectica.  With equal parts jazz-trained and classically-trained saxophonists, Dialectica attempts to find an aesthetic truth through the discourse of these two musical points of view, akin to the Dialectic method of philosophy found in Plato’s Socratic Dialogues. Their self-titled record was released in 2018.

Shannon is singer/ saxophonist/ songwriter with The Achromatics, a nine-person superband who released their debut record “Give Me That Beat” in 2017. They combine a powerful horn section, Motown-style vocals, a Latin-influenced rhythm section and a Top-40-calibre stage show. 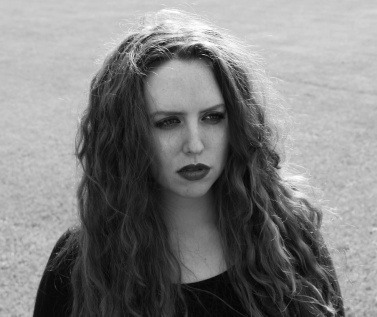 Her second record Modus Tollens (2017) explores simple and sincere compositions for saxophone and piano. Based on the syllogism for “denying the consequent”, the term Modus Tollens becomes a metaphor for challenging one’s initial assumptions, especially those that we make about art music and ourselves.

Shannon was one of the original members of Spectrum Music- a composers collective that provides a concert-hall home to Toronto’s chamber-jazz scene. With a sound unlike any other concert series, Spectrum’s mix of classical, jazz, pop, and world music has propelled them into their 8th year of programming this adventurous and meaningful new Canadian music. Shannon served as Managing Artistic Director from 2016-2018.

In 2013 she released a debut record of original music. “Shannon Graham and The Storytellers” features a ten person chamber-jazz ensemble performing wacky and whimsical programmatic music. She performed with The Storytellers throughout Toronto, most notably at The Music Gallery, Hart House Great Hall, and The Rex. Her CD launch performance at Gallery 345 was selected as one of that year’s TDJ special projects. Later that year, she was awarded a professional development grant from the Canada Council for the Arts to study composition with Roger Bergs.

In 2011, Shannon completed her Bachelors of Music in jazz performance at the University of Toronto, where she won the Alumni Music Association award for two consecutive years and studied saxophone with Alex Dean. That year she attended the Banff International Workshop for Jazz and Creative Music. 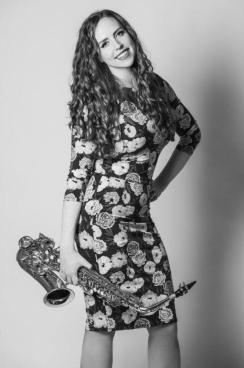 Originally from Edmonton, Alberta, she earned a diploma in performance from Grant MacEwan University in 2008 and was recognized with the Rawlco Radio award and CARAS Fred Sherrat award. Shannon has an extensive background in classical viola study and played in the Edmonton Youth Orchestra for several years. She was one of the original members of Edmonton’s Kamara String Quartet.